26 October 2012—"An Anglo- American-led thermonuclear bombardment  against leading nations of Asia including Russia and China: this danger now exists, for at least as long as a London-controlled U.S. President Barack Obama remains as President of the United States of America." (U.S. statesman Lyndon LaRouche, "Stop the Nuclear Holocaust!", Dec. 2011.)

Did you think we were exaggerating, if you read that frontpage quotation in the June/July 2012 New Citizen? That issue, featuring the report "Australia Prepares for World War: Tragedy, or Just Plain Farce?" as part of our overview of today's global showdown, circulated in 250,000 copies.

In less than half a year, the threat to your survival—to the survival of every nation, and of mankind—has become even more perilous. Listen to leading military and political figures from the two world powers which have the greatest arsenals of nuclear weapons, the United States and Russia.

In New York to address the United Nations General Assembly, Russian Foreign Minister Sergei Lavrov appeared 25 Sept. on the American TV interview show hosted by Charlie Rose, who asked him about the "Arab Spring" process of unrest and regime change in Southwest Asia. Said Lavrov, "I think we are now in the Arab Autumn.  I hope it's not going to nuclear winter." The term nuclear winter refers to one of the worst-case scenarios for utter devastation of the planet in an exchange of thermonuclear barrages.

A week later at the 4 Oct. opening plenary session of the Rhodes Forum-Dialogue of Civilizations, held in Greece, that organisations chairman Vladimir Yakunin, who is also the president of Russian Railways and a close ally of President Vladimir Putin, warned about the escalating crises around the world: "Fifty years after the brutal Cuban Missiles Crisis, we may again witness the very same kind of development of events."

On this month's anniversary of that 1962 U.S.-Soviet showdown, newly released papers from the archive of U.S. President John F. Kennedy's brother Robert F. Kennedy, who negotiated with the Soviet Ambassador to defuse the crisis, drove home how close the world came to nuclear war. One document was a draft speech JFK might have given after a U.S. bombing of the Soviet missile sites in Cuba— a scenario urged on Kennedy by his military advisers. Then, as repeatedly in the 1950s when senior U.S. military officers had pushed President Dwight Eisenhower to attack the Soviet Union militarily, such nuclear "brinksmanship" could have led within hours to a spiral of escalation to global nuclear holocaust. 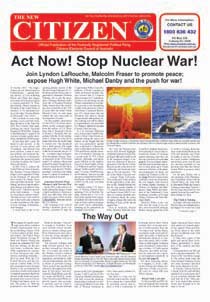