5 June 2012—The week before Christmas of last year, the Citizens Electoral Council circulated an urgent warning by U.S. statesman Lyndon LaRouche, in a media release and mass leaflet titled "Stop the Nuclear Holocaust!" There are two immediate dangers, LaRouche said: 1) the "threatened general economic breakdown-crisis in the trans-Atlantic sector, and 2) an already pre-staged, Anglo- American-led thermonuclear bombardment  against leading nations of Asia including Russia and China. This danger now exists for at least as long as a London-controlled U.S. President Barack Obama remains as President of the United States of America. This condition has been pre-staged since the murder of the former Libyan head of state [Muammar Qaddafi in October 2011] by a concert of Britain, France and the United States under President Obama."

Nearly six months later, the truth of those words is being demonstrated dramatically on both counts.

May 2012 began with a Moscow conference on Ballistic Missile Defence (BMD), where, on 3 May, Chief of the Russian Armed Forces General Staff Gen. Nikolai Makarov declared that further advances in the deployment of a BMD system by the United States and NATO in Europe would so greatly threaten Russia's security, as to necessitate a pre-emptive attack on such installations: the outbreak of military hostilities between the USA and Russia— world nuclear war. "Considering the destabilising nature of the BMDS," Makarov told an audience including U.S. officials, "specifically the creation of the illusion of being able to inflict a disarming first strike without retaliation, a decision on the pre-emptive use of available offensive weapons will be taken during the period of an escalating situation." He said that Russia would place offensive missiles in southern Russia and Kaliningrad (bordering Poland) for potential attacks on the NATO systems.

Then, on 17 May—just days before NATO at its Chicago summit did announce the interim operational capability of its European BMD network— Russian Prime Minister Dmitri Medvedev, addressing a law conference in St. Petersburg, warned that national sovereignty was under assault around the world, including through unilateral sanctions and military operations not approved by the United Nations, and the declaration by outside interests that countries' governments are illegitimate. "Such actions, which undermine state sovereignty," said Medvedev, "can easily lead to full-scale regional wars, even— I am not trying to scare anyone here—with the use of nuclear weapons."

Australia is deep into preparations for a British-directed, Obama-led nuclear world war against Russia and China. Indeed, our nation is a major chess piece in that war. Should such a war unfold, we will be hit by Chinese nuclear weapons, and perhaps by Russian ones as well.

This reality was the subject of a secret chapter in Australia's 2009 Defence White Paper, which envisaged an armed showdown initiated by the USA and Australia against China, beginning with Australian submarines blockading China's sea lanes, followed by China's hitting the Pine Gap radar installation with a missile. The Australian of 2 June summarised, "A secret chapter in the Rudd government's 2009 defence white paper detailed a plan to fight a war with China, in which the navy's submarines would help blockade its trade routes, and raised the prospect of China firing missiles at targets in Australia in retaliation."

Download the A4, printable version, including 2 above articles (PDF, 1 MB). 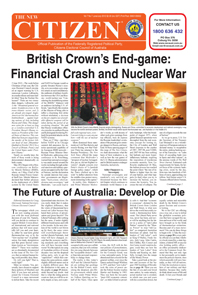 Because of the size of the paper each article is available to download separately. Click on the link below and a new window will pop-up.

The Real Science of Evolution
[1.3 MB]