Financial Crash Is On!
Nations Must Turn to LaRouche

August 19The worlds present globalist, hyper-speculative international monetary system is now imploding. It can not be stopped; the only question now is when it will finally blow, whether it is next week, in the next month or two, or just slightly longer. Your superannuation, which has been invested in this system? Forget it, its gone. Macquarie, and other Australian banks? Forget it, under the present system, theyre gone.

The worlds financial markets and central bankers exude panic from every pore: The day before we went to press, the U.S. Federal Reserve suddenly cut its lending rate to banks, its discount rate, by 0.5%, from 6.25% to 5.75%, because the hundreds of billions of dollars which the worlds central banks had poured into the crisis US$323.3 billion on August 9-10 alonedid almost nothing to stop the implosion of a speculative bubble estimated at US$700 trillion. In 1998 a mere $2 billion loss by hedge fund LTCM almost blew out the system, while international losses in this crisis are probably already 1000 times that.

This is not a sub-prime mortgage crisis, or a hedge fund crisis, it is the banking system itself which is blowing.

The end of the Bretton Woods system

August 17, 1971, when a group of international financiers convinced U.S. President Richard Nixon to take the U.S. dollar off gold. This ended the Bretton Woods system of fixed exchange rates and national sovereignty established by U.S. President Franklin Delano Roosevelt in 1944 (to which Australia under Prime Minister John Curtin and Treasurer Ben Chifley had signed on) designed to foster the growth of the worlds physical economy. Instead, a new system of unbridled private credit creation through ever more exotic debt instruments and the looting of the physical economy was unleashed.

The resulting crisis was already uniquely forecast by American statesman and physical economist Lyndon H. LaRouche back then, as he also forecast the steady succession of crises from then until now, such as the October 1987 collapse of the worlds stock markets, the 1997-98 Asian crisis and LTCM collapse, etc. At each point, the London/New York financial oligarchy created new forms of financial speculation which bought the system a few more years of life, only to make its present, final explosion that much more cataclysmic.

Such were the creation of the IT bubble, the derivatives markets, the speculative mortgage markets and accompanying real estate bubble, and the yen carry trade. Recently, hundreds of billions or trillions of new money was pumped into the system based upon mortgages which could not be paid by those losing their jobs in a collapsing economy, while banks and others can no longer borrow hundreds of billions in zero interest yen from Japan to speculate with, because the yen is soaring in value and they are losing their shirts in having to pay back yen worth 6% or more than the yen they borrowed. Thus, the central banks are flooding a bankrupt system with credit in a fashion unprecedented in history; this may buy them some time, but at the expense of a hyperinflationary explosion like that of 1923 Germany, and this time on a world scale. 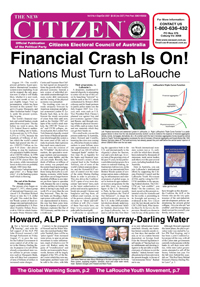