During the 1920s and 1930s the international financial oligarchy (the Synarchyâpron. "Sin-arkee") installed fascist regimes throughout Europe, as part of its scheme to eliminate sovereign, self-governing nationstates from the face of the earth. Men such as Mussolini, Franco or Hitler were financed and installed as mere puppets of the Synarchy. Fascism is on the rise again today, only this time it is called "globalisation". And, in case populations become restive under the brutal collapse in living standards which globalisation inevitably brings, the Synarchy is readying the classic kinds of police-state fascist rule which Hitler typified.

This process is now happening in Australia, and the man leading the charge for fascism here is John Howard. Merely look at the horrific legislation he is ramming through Parliament in the closing days of 2005 alone: draconian "anti-terror" laws little different than Hitler's (see p.2); IR "reform" whose purpose is to crush trade unions and living standards, just like Mussolini and Hitler did; and his cruel "welfare-towork" scheme, which is nothing but a typical fascist slave-labour scheme.

Throughout his political career, Howard has been nothing but a puppet of the Synarchy, in particular of its main postwar thinktank, the City of London, British Crown-sponsored Mont Pelerin Society, whose local affiliates include such radical rightwing "thinktanks" as the Institute of Public Affairs (which gave birth to the Liberal Party), the Tasman Institute, The Centre for Independent Studies and the HR Nicholls Society. These are funded by many of the same big mining companies, the banks, and big corporations which organised such mass fascist armies here in the 1930s as Sydney's New and Old Guards, and Melbourne's League of National Security. Howard's father was a member of the fascist New Guard in Sydney, probably because he worked for Colonial Sugar Refining (CSR), the chief sponsor of the New and Old Guards.

As we have documented in this newspaper (April, 2004), these fascist armies were prepared to seize power in the Depression if the ALP threatened to implement the same kind of directed-credit methods to finance great infrastructure projects which President Franklin Delano Roosevelt used to get the U.S. (and the world) out of the Depression and to defeat fascism in World War II. In this new worldwide financial and economic collapse, who will rule: sovereign nation-states committed to the Common Good, or the Synarchy?

Outside of the efforts of LaRouche's associates in the Citizens Electoral Council, the situation inside Australia itself would appear desperate, given that the ALP under the pro-globalisation, pro-fascist Beazley is no different than the Coalition under Howard (decent individuals in both parties notwithstanding). Fortunately, however, the battle for Australia (as for any other sovereign nation-state on the globe), will not be entirely decided here, but largely in Washington, D.C., where the fascist Cheney cabal is on its way out, and where LaRouche's influence in both the Democratic and Republican parties is growing by the day. The best thing you can do for Australia is to join LaRouche's movement here. 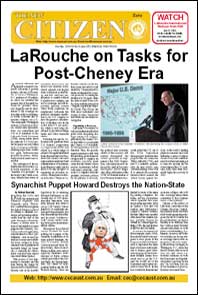