Australia Must Enter
the Nuclear Age!

Over the past several months, the American statesman and physical economist Lyndon H. LaRouche, Jr. has held a series of international webcasts from Berlin, Germany and Washington, D.C., with participation from government officials and political leaders from numerous countries, among them China, Russia, Germany, Italy, France, and the nations of Central and South America, in addition to the U.S. itself. In his presentations, LaRouche has outlined the stark reality now facing the entire planet: that we are presently in the midst of the greatest economic/financial collapse in history, which will usher in a New Dark Age like that which depopulated Europe in the 14th Century; or, we can apply the “American System” methods of national banking, great infrastructure projects and the utilisation of the most advanced science and technology to overcome this systemic crisis, very much as U.S. President Franklin Delano Roosevelt overcame the Great Depression of the 1930s, and defeated fascism.

The Greatest Bubble in History

On October 19, 1987, “Black Monday”, the U.S. stock market crashed by 508 points (22.4%), the single largest one-day collapse ever. This crash, which LaRouche had forecast in June of that year, would have ushered in a new depression, just as did the stock market crash of October 1929. However, the incoming chairman of the U.S. Federal Reserve Board, Alan Greenspan, legalised the gambling bets known as derivatives, and so built up the biggest financial bubble in history, with hundreds of trillions of dollars in derivatives. Through such methods, Greenspan temporarily avoided a collapse then, and in following crises, such as the “Asian Crisis” of 1997-98, but only at the expense of making the inevitable crash far more devastating, and that final crash is clearly on the horizon. Meanwhile, the actual physical economy has been looted in favour of the bubble, producing a profusion of multimillionaires and billionaires alongside growing poverty for most of the “lower 80%” of the population, as in Australia. So, the only thing worth discussing now is, how do we get out of this disaster?

This issue of the New Citizen features excerpts from LaRouche’s October 31st webcast from Berlin, in which he outlines the depth of the crisis and the general pathway out of it, including cancelling all derivatives contracts and reorganising the world financial system. It also features a study he commissioned from his scientific advisor, Dr. Jonathan Tennenbaum, “The Isotope Economy”, on the remarkable vistas of nuclear science available to mankind to overcome this crisis.

In response to a recent question from an Australian member of his youth movement, on how to approach the present crisis in our country, LaRouche replied: “Australia is, after all, a part of a world in which ‘interesting times’ prevail. In my view, there are two leading implications in that fact: First, once Australia comes out of the current state of its affairs, there are wonderful opportunities for development of undertakings of both national and world importance to be launched in there, and from there. Second, preparing as many Australians as possible for the launching of those national perspectives, to help keep their spirits up for the dark ages which we may reasonably hope will be passing on in due course, although, admittedly, none too soon.

“The problem lies not within the confines of Australia, but from the same danger to civilization as a whole, which not only presently confines, but actually menaces the people Australia.

“The world in which an Australia, in particular, might survive the threat of being transformed into a special kind of zoo for its hapless captives of the day after tomorrow, is a world based on the universal moral principle of the modern sovereign nationstate republic, a world in which nuclear-fission and thermonuclear fusion are the bedrock of both production within Australia, but in its relations with the world at large. Of what Earthly, or spiritual use to the rest of the world could Australia and New Zealand be, without productive relations premised on contributing to, especially, the future of Asia, across that deep oceanic ditch which separates the subcontinent from the island and other territories and peoples to the north?

“Australia’s existence as a nation depends upon such pivotal assets as the combined development and use of fissionable ore-stuffs and the development of thermonuclear fusion. Within its own borders, the key to the future of the nation’s population is the production of vast amounts of desalinated water from the ocean about it. This means correcting a bad, downward change in direction of policy, from modern European civilization’s progress, to life among the marsupials and monotremes.

“Since there is an inevitable, awful failure written into the drive toward a new Venetian empire of ‘globalization’ under the futile ambitions of the present crop of virtually quite useless Anglo-Dutch financier elite, what we propose is the only alternative to turning the premises back to the dingoes, either actual dingoes, or those transformed from human into virtual dingoes according to the prescription of H.G. Wells’ The Island of Dr. Moreau.” This issue of the New Citizen, particularly Dr. Tennenbaum’s truly beautiful work, “The Isotope Economy”, shows the glorious future available to us, if we fight for it. 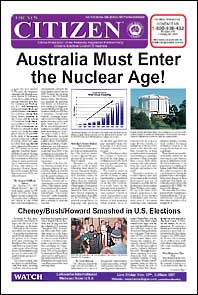