Save People and Nations, Not Megabanks

26 April—This New Citizen exposes the brutal new City of London- and Wall Street-dictated policy of "bail-in", now in force throughout Western economies: the confiscation of personal bank accounts and superannuation, to bail out megabanks like Australia's "Big Four". Bail-in is but a harbinger of still more evil policies. If we defeat it, then we have an excellent chance of defeating those as well.

Consider this. If you were a leader of the Crown/City of London-centred Anglo-American financial oligarchy and knew that your hallowed system was plunging towards the worst crash in history, which would unleash "anti-Establishment" upheavals far beyond those now seen in the U.S. Presidential election campaign, the surge of support for Jeremy Corbyn in the UK, or the rising minor party vote in Australia—would you sit on your hands until the enraged masses drove you from power?

No. You would unleash the tried-and-true methods of population control, that the British Empire has wielded around the world for centuries, but this time on your home populations, including in Australia. And, before your own physical power collapsed, you would demand that Russia and China submit to being looted to prop up your system, even at the risk that hostile confrontation with these powers will trigger a thermonuclear World War III.

For instance, Britain's MI5, MI6 and other security officials have repeatedly warned that the UK will inevitably be hit with mass terror attacks, dwarfing those in Paris and Brussels. Australia's local branch of MI5, ASIO, has foreshadowed similar threats. That alarum is used to justify police-state measures, the better to control a restive population. But how do they know such attacks are "inevitable"? Because the British intelligence apparatus, with its masters in the Crown and the City of London, has fostered such capabilities, a reality acknowledged in complaints by dozens of governments that Britain is "Londonistan". Known UK terrorists, such as 7/7 subway attacks inciter Abu Hamza, have been admitted MI5 agents; notorious recent ISIS recruits also have MI5 connections. Sydney siege gunman Man Haron Monis's many years of involvement with ASIO is a similar case in point.

But looking only at small fry like Abu Hamza and Monis is a dead end. Author Mark Hollingsworth was right, in his 2005 book Saudi Babylon: Torture, Corruption, and Cover-up inside the House of Saud, to point higher up. He wrote, "Prince Charles's relationships with prominent House of Saud members have created serious problems and obstacles to UK agencies investigating claims of Saudi financing of international terrorism, according to Special Branch sources."

In our 25 Nov. 2015 Media Release "Prince Charles and Saudi-backed terrorism: Demand answers!", the Citizens Electoral Council (CEC) called for Australia's future king to be summoned for questioning about: the financiers and propagandists of terrorism who sit on the board of his Oxford Centre for Islamic Studies; his own personal friendship with Saudi princes Bandar bin Sultan and Turki bin Faisal, both implicated in the 11 Sept. 2001 terror attacks in the USA; and the estimated $100-billion terror-financing slush fund generated by the Anglo-Saudi al-Yamamah arms deal, initiated by Margaret Thatcher and Prince Bandar in 1985 and negotiated by Charles personally in later years. When CEC activists publicised these links during Charles's 14 Nov. 2015 visit to Albany, Western Australia, the police ordered them out of town under pain of arrest!

Meanwhile the threat of nuclear war grows, as the nations that the late former PM Malcolm Fraser called Australia's "dangerous allies"—the UK and USA—push for confrontation with Russia and China, even though those countries, as leaders of the BRICS group (Brazil, Russia, India, China, South Africa), embody the current best potential for economic recovery and peace. NATO drives relentlessly towards the borders of Russia, violating promises made to Russian leaders in 1990, while preparing new generations of nuclear weapons and making changes in doctrine to provide for their first use. The Royal Institute of International Affairs, of which the Queen is patron, plugs in a March 2016 report for the inevitability of a military showdown with Russia. Barack Obama's "Asia Pivot" has drawn Australia into a dangerous military escalation against China, through basing U.S. Marines in Darwin, hosting U.S. fleets, and now pushing for a confrontation in the South China Sea.

2016 Election Agenda: Break Up the Banks!

To defeat the Anglo-American financial oligarchy driving these threats, including bail-in, we must destroy the financial power of the City of London and Wall Street, and their Australian arm, the Big Four banks and Macquarie. A Royal Commission into the banks is insufficient. We must break up Too Big To Fail banks, through a strict Glass-Steagall separation (page 4) of commercial banking, which includes deposits, from risky investment banking, stockbroking and insurance.

We must also return to national banking, in which Australia's original Commonwealth Bank was once a world-leader: a government bank to create and direct masses of public credit into nation-building projects, including water, power and transportation infrastructure, and expanded agriculture and manufacturing.

Contrary to media lies, Australia is hard-hit by the global financial crisis, evidenced in part by the prospect of a seventh prime minister in nine years— the population has quickly punished a succession of political leaders because they have stuck to the failed policies that destroyed our agro-industrial economy. However, if the nation is to survive, we Australians must demand the above solutions. The CEC is providing those solutions in its 2016 election policies, listed on page 4. 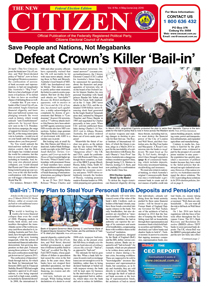