12 August 2013—The Citizens Electoral Council has blown the cover off an international plot to sneak Cyprus-style "bail-in" legislation through the Australian parliament, so that bankers can steal money from your bank account, to prop up banks proclaimed "Too-Big-To-Fail". The TBTF banks, also known as Systemically Important Financial Institutions, or SIFIs, include Australia's "Big Four": CBA, ANZ, Westpac, and NAB. This law will open the door to the seizure of all bank accounts—not just those over $250,000—and their conversion to near-worthless shares in the banks thus "recapitalised", as has already happened in Spain and Cyprus.

Just do the maths: The Australian government's Financial Claims Scheme of $20 billion per bank (which purports to protect deposits of up to $250,000) could not even begin to insure the Big Four banks' eligible deposits of close to $200 billion per bank. Furthermore, Australian banks hold $21 trillion of derivatives contracts, many or even most of which will turn into losses in the financial meltdown. And Australia's Big Four are so intertwined with the $1.4 quadrillion global derivatives market, centred in the Global Systemically Important Financial Institutions (G-SIFIs) of London and Wall Street, that Australian banks are now targeted as part of the supranational "bail-in" policy. The purpose of the planned legislation is to allow deposits to be seized from all Australian bank accounts: from individuals, churches and charitable institutions, schools, hospitals, trade unions, small and large businesses, local councils, and state governments alike.

The drive for bail-in, detailed on pages 2 and 3 of this New Citizen, is being led by the Swissbased Bank for International Settlements (BIS), the "central bank of world central banks". The Financial Stability Board (FSB), headquartered at the BIS, is directing the top levels of Australia's Treasury, Reserve Bank, and banking regulator APRA to draft the bail-in legislation. Kevin Rudd's first act as restored prime minister was to name an FSB member, senior Treasury official Jim Murphy, as his chief of staff. Meanwhile, the G20 group of nations, which Australia will chair as of 1 December 2013, has publicly committed itself to implementing the FSB's "Key Attributes of Effective [Bank] Resolution Regimes", prominent among which is bail-in.

The BIS and FSB are in a pellmell rush to consolidate a global fascist dictatorship, centred on the British Crowns City of London financial nexus. After all, the Bank of England founded the BIS in 1930, still dominates it, and these two institutions financed Hitler's regime in the 1930s. The Crown is desperate to consolidate its power as the world plunges into the next phase of financial crisis, which insiders expect to erupt in the near future and which will be far worse than the 2007-08 Global Financial Crisis (GFC) or even the Great Depression of the 1930s. ... 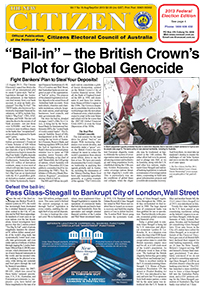