6th Dec. 2010—Ireland detonated a depth-charge in the global financial system in November, by bucking the City of Londons demand that Irelands taxpayers bail out the nations bankrupt private banks. Until it caved in on 22nd Nov. to excruciating pressure from the European Central Bank (ECB) and International Monetary Fund (IMF) to agree to an 85 billion euro bailout, the Irish government had insisted, rightly, that it is not the Irish state which is bankrupt, but the private banks—virtually all of which are simply offshore branch offices of the major banks of the City of London. What was and is threatened, therefore, is not the deposits of Irish citizens, but the very existence of the City of Londons Inter-Alpha Group of Banks, several of whose Irish branches are utterly bankrupt (as are their parent institutions, such as the Royal Bank of Scotland, the largest bank in the world). Should the Irish government not take on massive loans from the European Central Bank and IMF at gunpoint to bail out these speculative casinos, then, barring the urgent actions advocated by the American statesman and physical economist Lyndon H. LaRouche, Jr. (see below), the falling dominoes will bring down the entire world monetary system, an estimated 70 per cent of which is controlled by the Inter-Alpha banks.

The Inter-Alpha Group of Banks is at the centre of the actual British Empire. The illusion that the British Empire ceased after WWII comes from an ignorance of history: the British Empire was always, as now, a monetary empire, which controlled nations through the City of Londons domination of the global monetary system, enforced by free trade. For a century after the British defeated the French in the 1756-1763 Seven Years War (sometimes called the first World War), the British Empire was run by a single private monopoly, the British East India Company (BEIC). The BEIC maintained the largest army in the world and ran the worlds dope trade, while its court (private board of directors) was drawn from the City of Londons powerful banking houses and the Bank of England. Todays Inter-Alpha Group is the direct descendant of the BEIC, whose single greatest financial nexus since the Napoleonic Wars was centred in the Rothschild family, acting as agents for many of Britains and Europes most powerful families in the sweeping fi nancial reorganisation of Europe occasioned by those wars. City of London scion Lord Jacob Rothschild set up the Inter-Alpha group of banks in 1971 at the precise time when City of London/Wall St. stooge U.S. President Richard Nixon took the dollar off gold. This ended the Bretton Woods fixed exchange rate system established by U.S. President Franklin Roosevelt in 1944 over intense British opposition. During World War II FDR had informed British Prime Minister Winston Churchill that he intended to eliminate the British empire at the wars end, and replace its looted colonies with a system of industrially-advancing sovereign nation states, anchored upon fixed values among all national currencies rather than the floating exchange rate system which allows the British to drive the values of currencies up and down like yoyos, making a fortune in speculation. Just as Nixon ended the fixed exchange rate system, Lord Jacob Rothschild founded the Inter-Alpha Group as a massive pool of capital for precisely such currency speculation. Now comprised of 12 banks covering most nations of the EU (but with a web of interlocking ties to other banks worldwide), Inter-Alpha today dominates the world monetary system. Inter-Alpha members Rothschild, RBS and ING are prominent in Australia, and Rothschild has directed most of the worldwide public stealing known as privatisations from the era of the late 1970s Margaret Thatcher U.K. government onwards, including most of the federal and state privatisations in Australia since the late 1980s, including Anna Blighs current fire sale in Queensland.

After four decades of looting and bankrupting nation-states, today it is the Inter-Alpha Group which is bankrupt. But to maintain its system of fi nancial empire, especially since the present global financial crisis exploded in late July 2007, Inter-Alpha deploys its power-base among the interlocking boards of private and central banks and their subservient political parties to dictate murderous cut-backs by national governments to the living standards of their citizens, to pay for a globally-coordinated bailout. Led by the U.S. government of British stooge Barack Obama, governments around the world have forked over more than $35 trillion dollars to bail out private banks. The Irish bailout is typical: The City of London, the EU and the IMF have forced the Irish government to hand over its entire public pension fund, to slash the minimum wage by 12 per cent, public service pensions by four per cent, the public service itself by 24,750, coupled with a nine per cent rise in the VAT consumption tax from 21 to 23 per cent, and a 100 per cent increase in the carbon tax to 30 euro a tonne.

For a sensuous proof that it is only this bailout that has kept the worlds banks upright, take the case of Australias banks, ostensibly the worlds strongest: government guarantees to Australias banks amount to over $850 billion, on top of which the Commonwealth government, the Reserve Bank and the Future Fund have injected another $90 billion or so. Without this taxpayer support, Australias banks would be gone: collectively they are exposed to $15.2 trillion worth of the same derivatives fi nancial instruments which annihilated Lehman Brothers, and they owe foreign creditors around $1 trillion, half of which is on very short, 90-day terms. (By far the majority of the money Australias banks borrowed from overseas they have onlent into the domestic property bubble, in which the average property price is seven times average income, compared to the long-term average of three times. This sets Australia up for a property bubble collapse like those which triggered the current crises in the U.S.—and Ireland.)

It is poetic justice that it is the Irish people—victims of British genocide for 400 years (see p. 5)—who are poised to sink the Inter-Alpha-led Empire. Over 100,000 furious Irish citizens took to the streets on 27th Nov. in protest when the Fianna Fáil government finally caved to the international pressure. Nationalist political party Sinn Féin has demanded a general election, and not one euro for the banks; The bondholders must be burnt, said Sinn Féin president Gerry Adams. To the Irish people, it is a fight for their national sovereignty, a fact made clear by a stated threat from European Central Bank President Jean-Claude Trichet that the continuation of the current fi nancial system requires a system of supranational governance to replace the Westphalian system. The latter refers to the system of sovereign nation-states established by the Treaty of Westphalia in 1648 upon the principle of the advantage of the other, which had ended the previous 150 years of chaos and bloody religious warfare. A full EUIMF bailout would mean Ireland losing key areas of political and economic sovereignty, echoed Londons 16th Nov. Daily Telegraph. ...

Ideas, not votes— The CEC Defeated the ETS Scam, and We Will Defeat the Murray- Darling Genocide Plot as Well—if You Do Your Part
p. 1

NAWAPA, from The Standpoint of Biospheric Development
p. 8 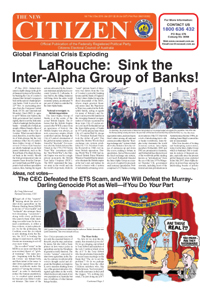