The prospects for fixing the global financial crisis improved markedly on January 20, with Barack Obamas inauguration as 44th President of the United States.

Obamas swearing-in closed the door on the eight disastrous years of the Bush-Cheney régime, which not only left the world in strategic and political chaos, but in an economic breakdown crisis which threatens the existence of the majority of people on the planet.

But the key to whether Obama will succeed, is the extent to which his Presidency adopts the urgent policy prescriptions put forward by the American statesman and economist Lyndon H. LaRouche, Jr. The likelihood of that happening took an important step forward in the course of LaRouches two most recent international webcasts, on January 16, just before the January 20 inauguration of President Obama, and on January 22 (see p. 3), just after. Both featured extensive back-and-forth between LaRouche and members of the new administration, including a public acknowledgement by senior members of the U.S. Presidency of LaRouches invaluable input.

LaRouche is the worlds leading economist, as manifest in his unparalleled record in both economic forecasting over the last four decades, and in his proposals to solve the present, long-ripening crisis. Typifying that record, he had announced in a July 25, 2007 webcastthree days before the sub-prime crisis exploded that The world monetary financial system is actually now currently in the process of disintegrating.... There is no possibility of a non-collapse of the present financial system none! Its finished, now!

The ensuing 18 months have only proved him right, despite episodic braying by media pundits and other hysterics that the worst is over.

LaRouche has repeatedly emphasised, as he did again especially on January 16, that he had warned on July 25, 2007 not of a mere sub-prime crisis, but of a breakdown of the international financial derivatives bubble, a bubble which is now on the order of magnitude, equivalent to, nominally, about $1.4 quadrillion dollars.

Even as the system collapses, that bubble has continued to grow, abetted by the $8 trillion or so which the U.S. Federal Reserve and Treasury have pumped into the bail-out. And the process is the same here in Australia, where the off-balance-sheet derivatives exposure of Australias banks expanded by $420 billion in just three months, from $13.8 trillion in June 2008 to $14.2 trillion by September.

Meanwhile, the physical economic host of the derivatives cancer is fast disappearing. The worlds leading economies have all suffered sharp drops in national income and staggering job losses, while world trade has ground to a virtual halt on the back of the collapse in Chinese manufacturing and a three per cent drop in Chinese exports in December.

For Australia, this has precipitated falls of 20 per cent or more in resource exports to China, a sharp increase in job losses in the boom sectors of the economy like mining and banking, and a stark warning from mainstream economics bureau Access Economics that 2009 will see the sharpest contraction in the Australian economy in history.

In both his webcasts, but with particular starkness on January 22, LaRouche hammered home what the new president must do, if the world is to survive: Establish a national bank on the model of that founded by the first U.S. Treasury Secretary, Alexander Hamilton, and use that bank to put the U.S. banking system and Federal Reserve into bankruptcy reorganisation. Banking functions dealing with the real economy will be protected, while the unpayable derivatives and other speculative paper will be set aside, either written off or frozen for later disposition. Simultaneously, the U.S. must engage the major powers of China, Russia and India to create a new international monetary system based on physical production and national sovereignty, to replace the present, London and Wall St.-centred globalist system of speculation. Its either this, or the world plunges into a chain-reaction breakdown not seen since the 14th Century Dark Age.

LaRouches prescription for Obama on banking reorganisation, is precisely what Australia must do to avert our own national catastrophe.

With $14.2 trillion in derivatives exposure, Australias banking system must immediately be put into bankruptcy reorganisation, beginning with the privately-controlled central bank, the Reserve Bank.

A national bank must be established to finance a national economic recovery program, centred on great new water, power and transport infrastructure projects.

Australia has the good fortune, thanks to the old Labor Party, that many of the urgent economic recovery measures prescribed by LaRouche have an historical precedent.

The Commonwealth Bank, for instance, was founded in 1911 as a true national bank by the great expatriate American and Labor MHR King OMalley, who declared of himself, I am the Alexander Hamilton of Australia. 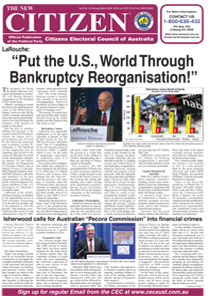