November 1The British Empire still exists. British gunboats no longer police the oceans to enforce free trade looting, but that empire rules more of the globe than ever, sailing under such flags as globalisation, manmade climate change, and European Unity, among others. In his October 10, 2007 webcast (pp. 5-6), American statesman Lyndon H. LaRouche delivered a powerful call to arms against the British assault upon America and upon the world, but the British themselves have trumpeted their resurgent imperial power, as in two recent articles in the City of Londons flagship Economist magazine, Britannia Redux (February 1, 2007) and The European Union: Europes mid-life crisis (March 17, 2007).

Britain has increasingly shaped the world, bragged the former article, through deindustrialisation, through British control of aid for Africa (and its immense raw materials reserves), of the debate on climate change (whose aim is deindustrialisation), of the process of European enlargement (the ever-expanding, British-shaped European Union), and through the global imposition of free trade, all coordinated out of the City of London, the worlds most important international financial centre. They might have added that most of the 9,000 hedge funds which have been buying up and destroying the worlds agriculture and industry, are based in Her Majestys Cayman Islands.

Bespeaking these British imperial aims, a futurologist article in the Economists March 17 issue, The European Union at 100, forecast a British-led EU vanquishing both the U.S. and Russia, following a U.S. financial collapse and an EU-instigated U.S./Russian nuclear confrontation over Ukraine.

The nation of America emerged during 1776-1783 in a war against the mightiest empire the world had ever seen. In the following years our own nation was peopled by boatloads of pro-American political prisoners whom the British shipped out here to rid their isles of the virus of republicanism. Now, America, Australia and the world at large will only surmount the present, existential global financial crisis by calling upon the ideals which inspired the founding of America as a beacon of hope and a temple of liberty for the entire world. These are not solely American ideals, but exemplify the hopes and aspirations of all of mankind, excepting imperialists and their lackeys. Once championed by Franklin, Washington, Hamilton, Lincoln and Franklin Delano Roosevelt, they are embodied today in the person and leadership of Lyndon LaRouche.

This issue of the New Citizen is dedicated to exposing and combatting some of Britains imperial schemes in their various guises, and to reviving among us those noble passions which animated old Labor and the best of our statesmen, in contrast to such pathetic British imperial puppets as Howard and Rudd. In particular, we call your attention to the Mission Statement issued by the LaRouche Youth Movement (p.7), which movement is rallying the youth of Australia for a new renaissance, so that we can finally get the bloody British financiers off our backs and secure republican sovereignty for our nation. 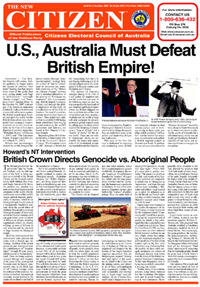