Personal Immortality, or "Clash of Civilisations"?

October 2—The lying news media will never tell you, but the world is now plunging into the greatest economic and financial collapse in centuries. This is not something that is going to happen, it is something that is happening right now. On September 27, for instance, the 16 largest banks in the United States met at the New York Federal Reserve to figure out how to stop the world financial system from immediately blowing to smithereens after the US$9 billion Amaranth hedge fund of Greenwich, Connecticut declared bankruptcy the previous week, upon the heels of dozens of others of the 8000 hedge funds worldwide. The bankers privately admit that the situation is "a thousand times" more serious than when the $2 billion LTCM hedge fund collapsed in 1998, which almost blew out the system then.

For every $1 of its own capital, Amaranth borrowed $4.50 from banks with which to speculate. So, not $9 billion, but $41 billion went down the chute, which means that entire banks could collapse, as well. In fact, many of the super-speculative hedge funds are merely fronts for banks in the first place.

Then, look at the real estate market: September saw 30% collapses in sales and new housing starts in some parts of the U.S., the sharpest plunge since the Great Depression. The multi-trillion dollar real estate industry, in the U.S., in the U.K., and in Australia, in particular, is the centre of the biggest speculative bubble in history, which is now crashing fast.

Then look at the guts of the remaining physical economy of the U.S., the auto sector. Ford Motor Co. just offered a buy-out package to all 75,000 of its blue collar workers (how do you produce cars with no workers?), and fired an additional 10,000 white collar employees. And this comes on top of the de facto bankruptcy and dismantling of General Motors over the last few months, formerly the largest industrial firm in the U.S.

This is a global process, and Australia is part of it, as seen in the evaporation of our manufacturing industry, and the growing joblessness and grinding poverty in our big cities, as well as in our devastated rural sector.

The financial oligarchy behind this "globalisation"-driven collapse are terrified that they will not consolidate fascist control over the world, as they financed Hitler to do in Germany in the 1930s depression, before the bubble pops, and that they might therefore lose their power in the resulting political upheavals. They have unleashed terrorism, Islamic or otherwise, as a pretext to launch wars all over the globe and to consolidate fascist control at home, as they are now doing in the U.S. and Australia. They aim to unleash a bloody, worldwide "Clash of Civilisations"—for which Howard and Costello have been doing their bit.

This is the context in which U.S. statesman and physical economist Lyndon H. LaRouche, Jr. is conducting an extraordinary international series of webcasts with political leader s and government officials from all over the world, in which he is outlining the nature of the political and economic revolutions which must take place to overthrow the globalist system, and return the world to the kind of optimistic, pro-industrial outlook which U.S. President Franklin Delano Roosevelt and our own Prime Minister John Curtin exemplified in their collaboration during World War II. Excerpts from LaRouche's September 6 webcast are featured on pp. 2-3 of this New Citizen.

The real issue here is the nature of mankind. Are men and women created in the image of the Creator, to continue His work of creation, and leave a far better world for our descendants , so ensuring our own immortal contribution to mankind? Or, are we cattle, to be herded and manipulated for the benefit of a rapacious financial oligarchy?

The oligarchy is terrified of LaRouche. Read his address carefully, because the future of the world, and of Australia, depends upon understanding what is now happening in the world, and then acting upon it. 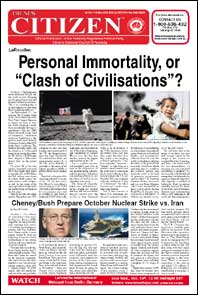