On August 14, U.S. economist and statesman Lyndon H. LaRouche, Jr. addressed a national conference of the Citizens Electoral Council (CEC) by telephone. The conference was attended by 120 CEC activists from all over the country.

LaRouche opened his remarks by noting that he will deliver a major address at a conference in Berlin on September 6, 2006, with participation of leading political layers internationally. Strategically, that address will evoke an earlier one in Berlin, on October 12, 1988, in which he forecast the breakup of the East Bloc and the Soviet Unionâone year before the fall of the Berlin Wall, when no one else in the world had the faintest clue of such a development. He then proposed a grand Eurasian development programme to unite the technology-rich Western Europe with the great population centres of Asia, as the centrepiece of a global economic renaissance (see p.2). Instead, the Anglo-Dutch and American oligarchies went for world imperial rule through âglobalisationâ and genocidal wars, such as Iraq, Afghanistan, Lebanon, etc., as a result of which the globe now spirals toward World War III.

LaRouche: What I warned [in 1988] would happen, happened. What I said should have been done, was not done. And we have an unroyal mess, in the world as a whole, as a result of peopleâs failure to acknowledge if I was right in forecasting something, which Iâd been doing for some time, on this thing, that perhaps they should take my forecast on what to do with that thing that was going to happen. And they didnât. They made an unroyal mess of the whole thing. And weâre now living in the tailend, or the fag-end of that particular mess.

Now, weâve come, in the meantime, to a new situation in the history of the planet, or shall we say, in the history of the Solar System: That is, as of now, as you have that from there with [Prof. Lance] Endersbeeâs little business on water, that we have two crises which are coming on fast now, which have to be addressed, in which we have to begin to change our policies to conform to the remedies for this challenge before us. First of all, as Lance has put the point, we have a global crisis of fresh water. That is, the fresh water supplies in various parts of the world, are now dependent upon fossil water, or something which is quasi-fossil water, that is, water of more recent vintage down below there someplace, such as the Ogalalla Aquifer in the United States, which does get replenishment, but the rate of replenishment is not sufficient to meet the needs. And therefore, because of this kind of situation, which is global in overall effect, we do have a global fresh water crisis.

The only way we can remedy this, now, in an economical fashion, is by a rapid deployment of the high-temperature gascooled reactor mode of nuclear fission reactors. All this stuff about soft energy belongs to people with soft heads, and no brains inside them. It does not belong to intelligent people. Globalisation, for example, has to goâall these kinds of things.

We now have to have a prol i ferat ion of hightemperature gas-cooled reactors of various degrees in all parts of the world, for, among other reasons, to deal with the fresh water problem. That is, weâre going to have to make fresh water out of the saltwater and things like that. That we can manage. We canât manage it with anything less dense in terms of energy-intensity, so-called, than the nuclear reactors. We have to do it. It happens, of course, in Australia, that you have two things which are very useful for domestic use and for export, in terms of mineral resources, and they make up somewhat for the lack of water. And these are, of course, uranium ore, and thorium ore. Australia, among other things, is one of the largest repositories of thorium ore in the world that we know of. And therefore, Australia should be moving into less aridity and more water. And of course, you know the areas in Australia which are now quasi-arid or very water-short, which could be very rapidly developed, and which are close to human settlements and so forth, which would benefit immediately, and could realise the infrastructure around it with nuclear reactors.

India, of course, is going for a full-scale program on the high-temperature gas-cooled reactors, there. And they will do everything from the order of magnitude of 100MW up to 800MW; 800MW being generally significant in the sense that we can produce fuel, such as synthetic methane from water, from saltwater, all kinds of water, and thus we donât need to be dragging petroleum from all parts of the world, which is a very low-cost item when itâs produced, and transporting it at great cost to various parts of the world, when we can produce the fuels required for automobiles and similar kinds of use, internal combustion and related use, right in the area in which the production goes on. 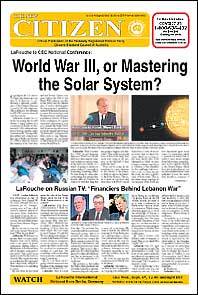