July 1–As we go to press, a debate on the immediate removal of U.S. Vice President Dick Cheney from office has exploded in the U.S., and is fast converging on the U.S. Congress, which has the Constitutional responsibility for removing a President or Vice President who commits "Treason, Bribery, or other high Crimes and Misdemeanors". This process was uniquely triggered by the history-making webcast delivered on June 21 by physical economist and U.S. Democratic Party leader Lyndon H. LaRouche, Jr. on the BAE scandal (see below), and Cheneys role in it. Less than 72 hours later, the Washington Post began a scathing series on Cheney as the de facto U.S. President, and as the author of numerous crimes, including the needless, bloody Iraq War; the widespread use of torture by the U.S.; and innumerable other violations of the Constitution.

The fascist-leaning U.S. President Richard Nixon resigned in 1973 under the threat of impeachment, most visibly orchestrated through the Washington Post and its Woodward and Bernstein reporting duo, a fact presently resonating in the minds of many Americans. And its June 23-26 series on Cheney provided detailed evidence proving LaRouches charge that Cheney was the "Herman Göering" of the Bush Presidency, and that 9/11 was the vehicle through which he was running a coup.

But, useful as it was, the Post series was clearly an "icebox piece" written long in advance, which may never have appeared had the Post and its faction in the Establishment not become scared that, following his webcast, LaRouche was "running away" with the most important story in decades.

Exemplary of other moves toward impeachment, on June 28, the 10-term Congressman from Seattle, James McDermott, announced in the House of Representatives, "Madam Speaker, it is time for a new exit strategy, one that removes the Vice President of the United States from office, voluntarily, if he chooses, but by impeachment if he stonewalls", and committed to co-sponsor Rep. Dennis Kucinichs impeachment bill, with 10 other co-signers.

The escalating revelations on BAE driven uniquely by the daily or even hourly investigative updates on the LaRouche Political Action Committee (LPAC) website are tightening Cheneys necktie. He and his wife are de facto agents of the British imperial apparatus centred in the BAE, the scandal around which involves far higher stakes than "corruption": the BAE is a "new British East India Company", the outfit which ran India for over a century as its own private colony, and which employed a private army far larger than that of Britain itself. Through manipulations of the London-centred, speculative international petroleum market, the BAEs original $100 billion slush fund (see p. 3) has snowballed into the trillions the largest single private hoard of cash in history. And, investigations have determined, the British monarchy is right in the middle of it through its Crown Agents corporation and affiliated entities.

Besides the U.K. and the U.S., investigations on the BAE are underway in at least seven other countries: Austria, Bulgaria, the Czech Republic, Hungary, Slovakia, Sweden and Switzerland. So what about Australia, where the BAE is one of our major defense contractors, indeed has itself announced that Australia is one of the six countries on which it is concentrating?

The backdrop to these dramatic developments is the ongoing disintegration of the world financial system. For instance, that system was almost paralysed by the June 10 collapse of two Bear Stearns hedge funds, which almost blew out the highly risky $2.6 trillion Collateralised Debt Obligations (CDOs) market. The amounts of money involved in this international daisy chain are beyond belief. They include the worlds totally-unregulated derivatives market, estimated at $750 trillion; the $9 trillion in the imploding U.S. mortgage market alone (50% of which are owned by banks); the multi-trillion annual mergers and acquisitions business, driven by hedge funds and private equity funds; and on and on.

Bear Stearns own activities are typical of the super-leveraging involved in all these markets. Their two failed hedge funds held perhaps $2 billion in already shaky "assets", which they put up to borrow $9 billion from banks such as Merrill Lynch, JPMorgan Chase, Citigroup, etc. They then leveraged this $9 billion into $29.7 billion in literal gambling bets on CDOs linked to the fast-disappearing subprime mortgage market. The details of all this are not important, only the principle involved: "the bigger they are, the harder they fall". This is emphatically true when they got big by borrowing based upon negligible assets, so that when they are forced to unload those worthless assets, the entire world financial system starts to cascade downward in one fire sale after another.

Amidst highly unusual, open cries of panic in London, New York and other world financial capitals, that is what is now underway. For constant updates on this fast-moving process, and on its Cheney and BAE components, see www.larouchepac.com. The good news is that LaRouche has put forward a clear way out of this unprecedented disaster, for some details of which see his website, his Webcast below, and the LaRouche Youth Movements "Mission Statement." 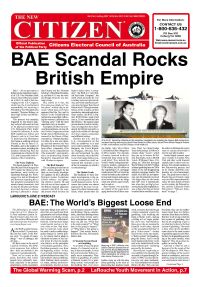