"Mother of All Bubbles" Exploding, Political Earthquakes Under Way"

It's time to wake up and listen to the Universe! It's speaking in no uncertain terms and even U.S. Federal Reserve Chairman Alan Greenspan has heard its rumblings. This week he confirmed Lyndon LaRouche's forecast that a financial tsunami would hit global hedge funds. What he did not say, which only LaRouche has the foresight and guts to say, is that the hedge fund blow-out is likely to explode anytime between mid-June and mid-July.

The Australian of June 8th began: "The world's most powerful banker has added his voice to the growing chorus of warnings about hedge funds," and The Age began, "It would be better for all concerned if the Leader of the Free Market at least pretended he knew what was going on." These were only two of many newspapers which began to report what LaRouche and EIR have been warning about for weeks.

In typical Green-speak understatement, the financial oracle told a June 7 International Monetary Conference in Beijing, that the hedge fund industry, "After its recent very rapid advance could temporarily shrink and many wealthy fund managers and investors could become less wealthy". He warned that many investors would be disappointed by their hedge fund experience and that, "The economic and financial world is changing in ways that we still do not fully comprehend." What is going on "is without precedent." He even admitted that it may well be that some sort of permanent change has taken place, that things really are different this time.

Despite these Delphic admissions, Greenspan typically poured cold water on talk of systemic risk saying, "So long as banks and other lenders to these ventures are managing their credit risks effectively, this necessary adjustment should not pose a threat to financial stability." But, how could they possibly manage their risks effectively, when, as Greenspan himself admitted, they don't comprehend what is happening? 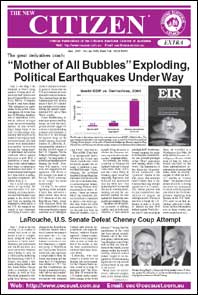