Global Warming is a Fraud!

If we were to shut down industry and energy-intensive agriculture in the way the "global warming" fraudsters propose, the world's population would collapse far below its present level of over six billion. This genocide is the actual intention behind this hoax, brought to you by the same financial oligarchy which created globalisation.

The historical record of atmospheric carbon dioxide concentrations, claimed by the Intergovernmental Panel on Climate Change (IPCC) as the justification for greenhouse gas reduction, is a fraud. Research by a Freiburg, Germany professor, Ernst-Georg Beck of the Merian-Schule, shows that the IPCC construed and concocted the pre- 1957 CO2 record from measurements on recently drilled ice cores, ignoring more than 90,000 direct measurements by chemical methods from 1857 to 1957.1

The IPCCs hoked-up record attempts to prove that CO2 concentrations have been steadily increasing with the progress of human industrial civilization. Beck's work con- firms a wealth of previous investigations which demonstrate that the IPCC cherrypicked its data in an attempt to prove that we must stop industrial development and return to the horse-and-buggy age, or face oppressive heat and melting of the polar ice caps. It shows that the Kyoto Treaty on reduction of greenhouse gases was based on a scientific fraud which violates the laws of the universe, denying the well-established determination of climate by cyclical variations in the Earth-Sun orbital relationship and in the Suns heat output.

In a thorough review of 175 scientific papers, Professor Beck found that the founders of modern greenhouse theory, Guy Stewart Callendar and Charles David Keeling (a special idol of Al Gores), had completely ignored careful and systematic measurements by some of the most famous names of physical chemistry, among them several Nobel Prize winners. Measurements by these chemists showed that today's atmospheric CO2 concentration of about 380 parts per million (ppm) has been exceeded in the past, including a period from 1936 to 1944, when the CO2 levels varied from 393.0 to 454.7 ppm. There were also measurements, accurate to within 3%, of 375.0 ppm in 1885 (Hempel in Dresden), 390.0 in 1866 (Gorup, Erlangen), and 416.0 in 1857 and 1858 (von Gilm, Innsbruck). Ironically, although the 1940s increase correlated with a period of average atmospheric warming, Beck and others have shown that the warming preceded the increase in CO2 concentrations. The data reviewed by Beck came mainly from the Northern Hemisphere, geographically spread from Alaska over Europe to Poona, India, nearly all taken from rural areas or the periphery of towns without contamination by industry, at a measuring height of approximately two meters above ground. Evaluation of chemical methods revealed a maximum error of 3% down to 1% in the best cases.

By contrast, the measurements hoked up from ice cores, show a rather steady increase in CO2 levels, conveniently corresponding to the preconceived idea that increasing industrial activity has produced a steady CO2 increase. As Beck's collaborator, Dr. Zbigniew Jaworowski, former senior advisor to the Polish radiation monitoring service and a veteran mountaineer who has excavated ice from 17 glaciers on six continents, has shown, the gaseous inclusions in ice cores have no validity as historical proxies for atmospheric concentrations. The continual freezing, refreezing, and pressurization of ice columns drastically alters the original atmospheric concentrations of the gas bubbles. 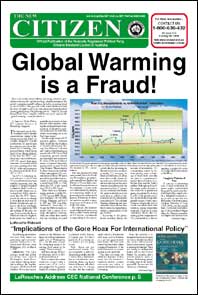