February 20 — At a ministerial dinner at his London residence on January 31, British Foreign Secretary Jack Straw orchestrated an agreement among his American, French, Russian and Chinese counterparts for the International Atomic Energy Agency (IAEA) to refer Iran's nuclear program to the U.N. Security Council (UNSC) for action in early March. On February 4, the IAEA duly voted 27-3 to do so. As in Iraq, referral to the UNSC is a prelude to war, and the clock is now ticking on something far worse than even the Iraq disaster. Australia was one of the 27, as Foreign Minister Alexander Downer crowed about in Parliament on February 7.

On Feb. 12 the London Sunday Telegraph reported on U.S. plans for "devastating bombing raids backed by submarine-launched ballistic missile attacks against Iran's nuclear sites", one of several such exposés. This is a re-run of U.S. Vice President Dick Cheney's August, 2005 plans to hit Iran with a nuclear first strike, which was foiled at the time by leaks from military circles, which were broadcast all over the world by U.S. economist and Democratic Party leader Lyndon H. LaRouche, Jr. and his associates.

LaRouche had already warned on February 3, the day before the IAEA vote, of the consequences of strikes against Iran: "We are staring at a confrontation more hideous than World War I, because the global financial and monetary system is already on the verge of vaporization, and any new military confrontation in the worlds oil patch, particularly one involving the possible pre-emptive use of nuclear weapons, will trigger global war, chaos, and the unleashing of a full-scale new dark age. The fools in Washington, typified by Vice President Cheney, have no idea what they are detonating. They just blindly follow the orders of Synarchists like George Shultz." Former U.S. Secretary of State George Shultz is a key figure in the pro-fascist banking networks in New York and London known as the Synarchy (pron. "Sin' ar kee"). 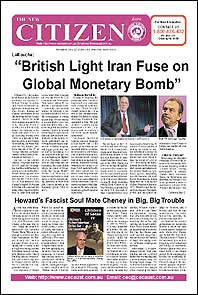