19 Nov.—Next to no one forecast the global financial crisis (GFC) of 2008, except for American physical economist Lyndon H. LaRouche, Jr. He was likewise unique among prominent individuals and institutions, in that he proposed a solution to the impending crisis.

Today, warnings of a new, far more severe GFC are appearing daily from such institutions and persons as the International Monetary Fund, the Bank for International Settlements, the U.S. Federal Reserve, and even former Bank of England Governor Mervyn King. What's more, repudiation of the system of war and usury that has dominated the transatlantic region, a rejection already seen in the BRICS (Brazil, Russia, India, China, South Africa) group's initiatives for a new, just economic order, has now spread to the UK and the United States: it was expressed in the June Brexit referendum, when British voters rejected the European Union, and in the 8 November election of Donald Trump as President of the USA, defeating Establishment candidate Hillary Clinton. The large "minor party" vote in this year's Australian elections is part of the same picture.

The continuing self-destruction of the globalised financial system, combined with the worldwide pattern of rebellion against it, puts the world at a dangerous, but also very promising, point.

If the financial contracts called derivatives are "unexploded nuclear bombs nestling deep in the financial system", as Business Insider put it recently, many economists believe that ground zero is most likely to be Deutsche Bank, the former giant of German industrial banking. In the 1990s, Deutsche Bank adopted the Anglo- American investment banking model, moved many operations to London, and eventually brought in such City of London figures as John Cryan (of S.G. Warburg) and Richard Meddings (Standard Chartered) to executive and supervisory positions. Deutsche Bank holds one of the world's largest hoards of utterly worthless derivatives, a mass of speculative contracts that interlock through counterparty relationships with virtually every other major bank in the world.

Italian and French banks are in no better shape, while seven of the eight biggest Wall Street banks have failed recent "stress tests". Australia's "Big Four" are world leaders in derivatives operations, in which Britain's "Big Six" banks are likewise up to their eyeballs (Figs 1 and 2). As competent analysts acknowledge, it was the explosive growth in derivatives speculation over the previous decade, that caused the 2008 crash—even though derivatives speculation had likewise provoked the near-meltdown of the global system in August-September 1998. 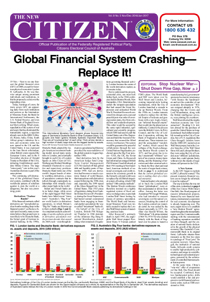