1 November 2015—The intensifying global financial crisis is driving the Anglo-American elite to move for a showdown with China and Russia, and a global dictatorship under the fraudulent pretext of "climate change".

Rarely has a powerful group of oligarchs been so at odds with the reality of their own bankruptcy and the availability of an alternative to their dominance, as the leaders of the United States, the UK and Australia are today. They can cope with neither the breakdown of the trans-Atlantic financial system of the City of London and Wall Street, nor the striking progress of the BRICS alliance (Brazil, Russia, India, China and South Africa), which has taken the first steps towards replacing the present, bankrupt global system. The Anglo-American fanning of the danger of World War III has been countered by Russian actions around Syria, but the threat of a thermonuclear global showdown remains high.

International finance is worse off now than even in 2007-08. Global debt (without even counting speculative derivatives obligations) has expanded since then by more than 40 per cent, from $142 trillion to $199 trillion, or 286 per cent of world GDP! The rise was fuelled by six years of central bank electronic money issues, the so-called "quantitative easing", exclusively to prop up the London-Wall Street mega- banks. Economic productivity, meanwhile, has crashed worldwide, with the exception of China and a handful of other countries, because of austerity policies that slash living standards and choke off investment in productive industries and infrastructure.

The spark for a final implosion may come from any of the interconnected speculative bubbles in resources, real estate, and derivatives instruments, the latter estimated at more than US$2 quadrillion ($2,000,000,000,000,000). Resource- trading giant Glencore and derivatives mega-speculator Deutsche Bank have recently been pegged as the possible "next Lehman Brothers"—triggers for a global meltdown. With commodities prices already plunging, Glencores debt is estimated at more than $100 billion, plus a nominal $2 trillion derivatives exposure. Deutsche Bank in October declared a $7 billion singlequarter loss, stoking fears over its $75 trillion derivatives exposure.

As documented in previous issues of this newspaper, the Anglo-American Empire, the "informal financial empire" centred in the City of London and its junior partner Wall Street, is in its death throes. The British Crown, in which the real power of this system is institutionalised above any democratic control, will strive to preserve Anglo-American economic, military and political global dominance, at any cost. Foremost is their continued drive against Russia and China.

At the same time, the initiatives of BRICS and its allies are a rallying point for war-avoidance and economic recovery, for any nation that chooses to cooperate with them. The months since the July 2015 BRICS summit in Ufa, Russia have seen intensified talks on the coordination of Chinas Silk Road Economic Belt program with the Russian-led Eurasian Economic Union, as well as such dramatic project news as Egypt's opening of the Second Suez Canal, in August. Most recently, Chinese President Xi Jinping brought his win-win economic cooperation policy to London in a 20-23 Oct. visit, including talks on boosting trade, jet engine deals, and steps towards China's building the first nuclear power station in the UK in three decades. ... 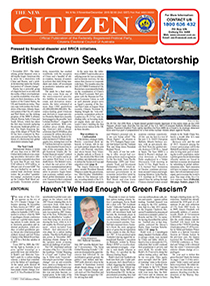