"The World Land-Bridge: Peace on Earth, Good Will towards All Men"

Melbourne, Australia on 28- 29 March was the scene of the landmark international conference "The World Land-Bridge: Peace on Earth, Good Will towards All Men", sponsored by the Australian political party, the Citizens Electoral Council (CEC). In person or by live or pre-recorded video, speakers from seven other countries and across the political spectrum joined Australian ones to promote awareness of the collaborative process under way among the powerful BRICS nations—Brazil, Russia, India, China, South Africa—and the potential it represents for a new, just world economic order. The full proceedings of the conference are available in video at cecaust.com.au/2015conference and in print from the CEC (ordering info, page 3). This newspaper presents some of the highlights of the conference, which speaker Dr Georgy Toloraya, executive director of Russia's National Committee for BRICS Research, called a "milestone".

The event was conducted in the spirit of the Schiller Institute's New Paradigm series of international conferences, organised by the Institute's founder and chairman Helga Zepp-LaRouche in recent years, to promote collaborative economic development and Classical culture as the alternative to strategic confrontation against China and Russia, which carries the danger of thermonuclear world war.

At the outset of her keynote speech, Zepp-LaRouche emphasised that the global situation is presently at a moment known in Classical drama as the punctum saliens: when the old axioms by which the hero or leading figures have been functioning will cause a disaster for both them and the society they lead. The challenge is: will those figures mobilise the courage and wisdom to radically transform their axioms, and so secure a path to safety?

"Right now", said Zepp-LaRouche, "we have two existential crises. We have a banking crisis building, far worse than the Lehman Brothers crash in 2008, which could evaporate the entire financial system at any moment. But, even more existential for the existence of mankind, is the fact that we are extremely close to the danger of a global thermonuclear war.

"The old paradigm, which we absolutely have to get rid of, you can say starts with what we call, generally, globalisation. Because globalisation is really only another word for the Anglo-American-dominated financial system, which expanded after the collapse of the Soviet Union and accelerated after the repeal of the banking separation of Glass-Steagall in 1999, where you have had absolutely unlimited, unbridled speculation, where the rich became richer, the poor became poorer, and that system is basically now all-dominant in the western world, in the trans-Atlantic sector.

"Along with this globalisation, you had the Project for the New American Century doctrine, associated with the administration of President George W. Bush and Vice President Dick Cheney [2001-09], which was the idea that, with the collapse of the Soviet Union, there would be only one superpower left and that superpower would, based on the special relationship with Great Britain, turn the world into an empire. And, obviously, that is the reason why we are right now on the verge of World War III."

That process, she continued, has included "regime change of all governments that would oppose such a globalisation, such a world empire, and also colour revolutions, using NGOs financed by western institutions, to topple these governments. 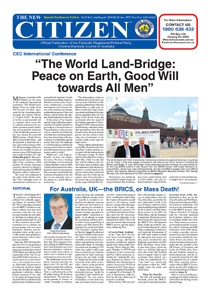