An Ecumenical Response to Evangelii Gaudium: Listen to Pope Francis!

An Open Letter to the Catholic Church in Australia

Into the profound spiritual and economic crisis now gripping the world, Pope Francis has intervened with his Apostolic Exhortation Evangelii Gaudium (The Joy of the Gospel). Whilst it is addressed to the leaders and lay faithful of the Catholic Church, his impassioned call for a "new evangelisation" should inspire all men and women of good will, especially those in ecumenical agreement with Christianity, who know to be true, that which the Pope emphasises afresh: that every human being is "God's handiwork, his creation", for "God created that person in his image, and he or she reflects something of God's glory." (274)1

I and the Citizens Electoral Council share the Pope's insistence that because all men and women are created imago Dei ("in the image of God"), every one of us is morally obliged to act to secure the Common Good.

Pope Francis is an immensely loving pastor, and therefore a very tough one. He insists, "It is no longer possible to claim that religion should be restricted to the private sphere and that it exists only to prepare souls for heaven", but, rather, "There is a need to draw practical conclusions". ("The Church's Teaching on Social Questions", 182) This new evangelisation, he states repeatedly, must be understood in its actual context, that of the present existential global economic crisis whose reality Catholics may ignore only at peril of both body and soul.

At the outset of Chapter Two, "Amid the Crisis of Communal Commitment", Pope Francis warns that "certain present realities, unless effectively dealt with, are capable of setting off processes of dehumanisation which would then be hard to reverse." (51)

Among these "present realities" are the fact that billions of human beings suffer near or actual starvation; that governments continue to bail out the "Too Big To Fail" (TBTF) banks with trillions of dollars even as they draft legislation (as in Australia) to allow these same banks to seize individual deposits ("bail-in"); that unemployment is skyrocketing throughout much of the world, even in "advanced sector" countries such as the United States, those in the European Union, and Australia, with youth unemployment reaching as high as 60 per cent, as in Spain; that old diseases have become increasingly antibiotic-resistant, and new ones are emerging; that Western popular culture is rooted in hedonism, violence and an utter disregard for the Common Good, and even for human life itself; and that innumerable regional wars and conflicts could suddenly escalate into a global thermonuclear war, as many world leaders have warned in recent weeks. ...

Click here to download the same document in a letter format complete with explanatory notes and references. 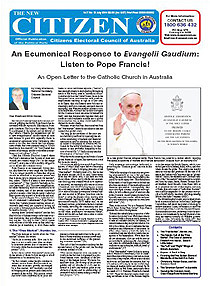