15 February 2014—As you read these words, the world is poised on the brink of thermonuclear war. Unless the present direction of world politics and finance is suddenly, radically changed for the better by the ouster of a Nero-like, British-controlled U.S. President Obama and the reorganisation of the global financial system to wipe out the power of London and its satellite, Wall Street, one day very soon and without warning, all-out thermonuclear bombardments will erupt, resulting in the almost certain extinction of the human race. This war will be initiated either by an Anglo-American alliance directed by a British Crown intent on securing permanent world rule by London and Wall Street or, defensively, by that alliance's intended victims, Russia and/or China. Each of the latter nations has repeatedly warned in the starkest terms, that if they feel their very existence is threatened, they will initiate first strikes.

The driver for this war is the crash of the British Empire's trans-Atlantic, speculation-ridden financial system, now plunging into a collapse far worse than that of 2007-08. In contrast, Russia's economy is relatively stable and its leaders have drafted plans for largescale development, while China's economy, along with those of some of its Asian neighbours, continues to grow. China's recent Moon landing, and its massive investments in building new cities and high-speed transport, nuclear power, and great water projects, illustrate that country's forward orientation. While much of Eurasia thus plans for a bright future, the Anglo-Americans and the EU are shutting down their own physical economies, according to the dictates of the British Crowns Green fascist policies whose stated purpose is to reduce the world's population from seven billion to one billion, or even less. Given that physical economic disintegration and the acceleration of the trans-Atlantic financial collapse, the time for the Anglo-American empire to launch a war of world conquest is now, or never.

Now, turn your eyes to Ukraine. This emergency issue of The New Citizen documents systematic Anglo-American backing of a mass fascist movement in Ukraine, aimed at either seizing power from the legitimately elected government, or launching civil war. Given Ukraine's economic ties and physical border with Russia, the real target is Russia itself, as under long-standing Anglo-American strategic doctrine (Figs. 1 and 2, page 3).

Such Anglo-American sponsorship of a mass fascist movement leading to world war is not unprecedented: in the 1930s, London and Wall Street financed the rise of Hitler. Brown Brothers Harriman executive Prescott Bush, father of U.S. President George H.W. Bush (in office, 1989-93) and grandfather of President George W. Bush (2001-09), for instance, in late 1932 personally transferred the funds that enabled Hitler's then-fading Nazi party to come to power soon afterwards. The result was World War II, in which an estimated 28 million of the USSR's people died, a reality burned into the souls of most Russians today, including President Putin, whose elder brother died as a child during the 872-day Nazi siege of Leningrad in 1941-44. ... 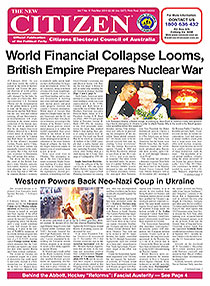