Behind the GFC: Charles Darwin was a Fraud!

15th August, 2011—The hyperinflated global financial system has now entered its inevitable, terminal phase of collapse, as long forecast by the American physical economist and statesman Lyndon LaRouche. Even more than the rampant financial speculation of London and Wall Street, the single greatest cause of this collapse is environmentalism. Since their emergence in the 1960s, the Greens have systematically banned the application of scientific and technological advances to the worlds physical economy, and thereby collapsed it. The Greens are fascists, who propose and have largely implemented a totalitarian, dictatorial regimentation of society just like Hitler, but even worse: the Greens intend the total collapse of modern agro-industrial society.

The acknowledged granddaddy of this Green Fascist movement is Charles Darwin, a third-rate intellect who discovered nothing whatsoever, but who was lionised by the British oligarchy to help secure their global imperial rule. If we are to initiate the otherwise feasible global economic recovery specified by LaRouche, then we must start by unmasking this fraudster.

The following is an abridged and edited version of the speech which Citizens Electoral Council National Chairman Ann Lawler delivered to the 23-24th July CEC National Conference, Educating the Mass Strike: Cosmic Radiation Beats Green Fascism. To our knowledge, it is the most devastating refutation of Darwinism ever composed. Mrs Lawlers full presentation will appear in the October New Citizen, together with several other conference speeches.

We introduce Mrs Lawlers exposé with a quote from a well-known 20th Century political leader, with whom many, perhaps even most Australians would agree with. Certainly all Greenies do. Do you?

"In attempting to rebel against the iron logic of Nature, man comes into conflict with the principles to which he owes his very existence as a human being. Thus his action in defiance of Nature is bound to lead to his own downfall. To this we hear the objection  'But man conquers Nature!'

"Millions thoughtlessly babble this  nonsense, and end by really imagining themselves as a sort of conqueror of Nature"

This was Adolf Hitler. Like most leading Nazis, Hitler was an ardent Greenie.

The Humbuggery Of Charles Darwin 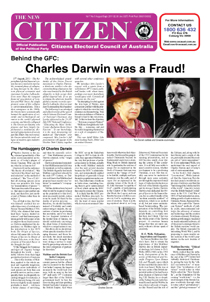