War against the British Empire!

16th March From Tunisia, to Egypt, to Libya and across the Middle East; from Germany, to Ireland, and over the Atlantic to numerous state capitols across the U.S., a mass political strike is presently erupting around the globe, shaking or toppling governments as it goes. There are no "local causes" for this global upheaval. Rather, the growing demonstrations and even revolutions all reflect a determined commitment by citizens worldwide: "We are not going to take it anymore!" That when pushed to the limit by soaring prices for food and other necessities (and increasingly, even the disappearance of food itself), by mass layoffs, by mass home foreclosures, and by ever- harsher austerity measures of all sorts enforced by governments which are either groveling before IMF/World Bank "conditionalities" or which, in the "advanced sector" are pouring trillions upon trillions of taxpayer dollars into bailing out usurious, speculative banks while relentlessly slashing vital services, human beings will assert their dignity, and their right to a future—even at the cost of their lives.

In his A Defence of Poetry, the great poet Percy Bysshe Shelley explained the nature of such unique moments, when great masses of seemingly quiescent human beings are lifted by a power which they themselves do not really understand, when they suddenly become capable of "communicating and receiving intense and impassioned conceptions respecting man and nature", and of the most dramatic actions. Such moments unleash profound changes in the course of history, either for the better as in the American Revolution upon which Shelley was reflecting, and in the birth of our own pro-American, anti- British "old Labor" Party in the mass strike wave here in the 1890s, or, frequently enough, for the worse when the people have no adequate leadership nor a practical vision of how to shake off the tyranny and to reconstruct their nations, as in the bloody French Revolution of 1789 and ensuing decade of the Napoleonic Wars.

The present worldwide mass strike is responding to a single cause: the brutal tyranny of the British Empire, an empire not so much of 19th Century-style redcoats and gunboats, nor of a British population which itself is cruelly oppressed, but of a City of London/British Crown-centred worldwide empire of monetarism, which demands that its banks be bailed out and its imperial system maintained at all costs, even by the mass murder of billions of human beings.

But that British imperial monetary system is now exploding, and it can therefore be defeated. The nature of that system, the nature of the worldwide mass strike now erupting against it, and the needed measures to replace it and to launch mankind into the greatest renaissance in history have been uniquely outlined by the American physical economist and statesman Lyndon H. LaRouche, Jr., most recently in his 10th March Webcast, "Ireland & America". [www. larouchepac.com] There, LaRouche reflected on the interlinked historic Irish and American republican struggles against this British Empire, and on the Irish elections of 25th February which saw the ruling Fianna Fáil party, the largest party in the Dáil (lower house of parliament) for the last eight decades, but which had committed itself to bail out Ireland's private (British-owned) banks at the expense of the Irish people, collapse in the worst defeat of a ruling party since the nation was formed in 1922. The republican Sinn Féin movement led by Gerry Adams, by contrast, which has vowed not to spend a penny to bail out the banks, more than trebled its seats in the Dáil to overnight become the leading opposition party in a struggle which is only beginning.

So far in Australia we have had just a brief taste of this process, in the fury which brought down both Malcolm Turnbull as Liberal Party leader, and then Prime Minister Kevin Rudd over their British- authored demands for draconian "emissions trading/ carbon tax" schemes to allegedly combat actually non-existent "global warming". But we have seen nothing compared to what is now brewing. In our daily organising in the streets across this country, we in the Citizens Electoral Council and LaRouche Youth Movement increasingly hear the refrain, "We need an Egypt here!"; or even, as from one seemingly staid matron recently, referring to not only the increasingly despised Gillard government but to the entire presently ruling political class including the Coalition and the Greens: "I think theyre trying to kill us."

Just look at some of the actions of this "ruling political class": they are ruthlessly, relentlessly shutting down the Murray-Darling Basin, one of the greatest agricultural miracles in the world (the Howard Coalition government, remember, wrote the genocidal Water Act 2007), even as over one billion people are starving worldwide and Australias own food prices are soaring, while our farmers are committing suicide and we are becoming ever more dependent on food imports; they are sitting by while the British-run Coles and Woolworths duopoly drives dairy and egg farmers (among others) out of business by the day; and they clearly have no intention whatsoever to actually rebuild the vast flood and cyclone-ravaged areas of our nation in Queensland and elsewhere, but will just leave them to moulder and rot and people to cruelly suffer and die, because "we don't have enough money". This, even as the ALP/Coalition/Greens have enthusiastically or otherwise agreed to bail out our major banks—the local arms of this British imperial monetarist system—with almost $1 trillion dollars in government guarantees and injections from the Reserve Bank and Future Fund already, with more on the way.

As part of this worldwide revolt, this deepening mass strike in Australia already has some of our press whores, among others, squealing and peeing their pants, demanding that we submit to those who, indeed, are trying to kill us, either through malice or, for most of them, through just plain cowardice in the face of their imperial masters.

But, just as in the rest of the world (to which Australia is intimately connected despite our physical isolation), for this burgeoning mass movement here to succeed it must know two things: 1) the true face of its oppressor, the British Empire, and 2) the precise policies which must be implemented both in Australia and worldwide, to defeat this enemy. For elaboration on both points, we refer you in particular to LaRouches historic 10th March Webcast and to CEC National Secretary Craig Isherwoods 15th January Address to the Nation printed below, along with the rest of this issue of the New Citizen. It is time you joined this movement—you really have no choice.

Feature:
"We are launching a War of Liberation against the British Empire"
p. 1-7


The Carbon Tax is British
p. 1

The Euthanasia bills: Why the Greens want to kill people
p. 8 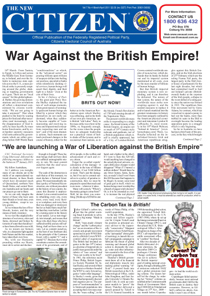