October 5, 2009—Behind the media veil of recovery, world civilisation is on the brink of a total financial and economic collapse unlike anything known in world history thus far. On 30th September, the last day of Americas fiscal year, U.S. statesman and physical economist Lyndon H. LaRouche, Jr., the worlds leading economic forecaster, again warned, October is the setting which promises an onrushing economic breakdowncrisis world-wide.

Since July, LaRouche has forecast that the hopeless attempt to balance the books of innumerable bankrupt enterprises at the fiscal year-end, from major corporations and banks to virtually all 50 U.S. states, will unleash a global chain-reaction disintegration during October. Under present policies, that chain reaction is unstoppable; the only question which remains, is how soon it erupts into worldwide chaos. It is like a man who has advanced cancer or some other deadly disease—he is already doomed, the only question being when, precisely, he dies. Whether in October, or shortly thereafter, without the urgent remedial actions proposed by LaRouche, a near-term chaotic breakdown of the system is guaranteed.

The Shadows on the Wall

Americas utter bankruptcy is evident in its publicly-funded $23 trillion or more bailout of Wall Street and the City of London, and in the runaway collapse of its physical economy, which the bailout has only exacerbated. The following figures are only indicative of the crisis, mere shadows of a far deeper process:

* Five million jobs have been officially lost under President Obama—this despite a multi-trillion dollar stimulus package.

* 32 million Americans, over 20 per cent, are now either officially unemployed; forced to work part-time; or have simply dropped out of the labour force in the last 21 months, according to the wildly understated, lying official figures. Bankrupt States and cities are now cutting tens of thousands of jobs per month, savaging vital services such as police, fire, sanitation, maintenance, etc.

* 48 of the 50 States are, by their own figures, hopelessly bankrupt, and, unlike the Federal Government, cannot print their own money. Therefore, like a cat chasing its tail, they are forced to continually cut more jobs and services in a vain attempt to balance their budgets, but each attempt causes their tax revenues to plunge still further, while the ongoing collapse accelerates.

The collapse of the U.S. will blow up the entire world. Therefore the message carried in September by Kevin from Australia to Rupert Murdoch, the world media and the G-20 nations convened in Pittsburgh, of Australias powering economy, is absurd beyond belief. Just consider the dependence of our economy upon that of China, for instance, which in turn is inextricably interlinked with that of the U.S. For one thing, look at Chinas dollar conundrum: if China dumps its $2 trillion or so reserves of U.S. dollars, whose value is disintegrating daily in a world hyperinflationary blowout like that of 1923 Germany, it will collapse the dollar, which will bankrupt its biggest customer and thereby itself; but if it holds its U.S. dollars in order to prop America up, Americas unstoppable bankruptcy will collapse the dollar anyway, and bankrupt China, too. Thus, any short-lived appearance of health, such as Australias momentary windfall from a China stockpiling raw materials, is like the bloom on the cheeks of one dying of tuberculosis. Continued Page 2 (PDF 171 KB) 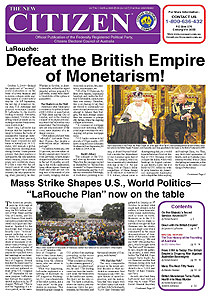 [WARNING: 3.5 MB]
Scroll down to "Contents" to download by section