The global carbon dioxide cap-and-trade scheme which British imperial stooge Kevin Rudd is now attempting to ram through the Australian Parliament, and similar legislation pending in the U.S. and other countries, will reduce the worlds human population by billions—and that is its intent.

The lie of human-induced climate change, was first hatched more than three decades ago by leaders of the British eugenics-cum-environmental movement, led by HRH Prince Philip. It was first championed by Margaret Thatchers science guru Sir Crispin Tickell, along with Australias very own eugenicist-cum-scientist Sir Frank MacFarlane Burnet. It has nothing to do with science. It is a British imperial doctrine to justify wiping out nation states—and billions of human beings—in order to secure the continued world rule by the still existing British Empire, the core of whose power is the now-collapsing, privately-controlled international monetary system.

Those, Prince Philip-centred circles pushing the global warming fraud, targeted human CO2 emissions as its ostensible cause, because CO2 is the natural, and necessary, by-product of the industrial activity that sustains human life—energy, agriculture, manufacturing etc.

From 2006, their steadily-built hysteria about global warming erupted into a full-blown public relations offensive behind Al Gore and his quack movie, An Inconvenient Truth. Gore himself, an intimate of Royal princes Philip and Charles, led the push for a global financial trade in CO2 emissions as the solution, a trade from which he himself is raking in the dough.

Now, in the countdown to Decembers United Nations Climate Change Conference in Copenhagen, set as the artificial deadline for the enactment of a global cap-and-trade scheme, governments are being ordered to pass enabling legislation. British lackey Kevin Rudd has positioned Australia at the front of the herd, by his determination to ram the Carbon Pollution Reduction Scheme bill through the Senate as soon as possible.

While Rudds push has provoked a growing backlash, as in the National Party, the Institute of Public Affairs (a local arm of the British Crowns free-trading Mont Pelerin Society), and The Australian newspaper, these clowns have limited their arguments to such impotent proclamations as: cutting Australias emissions, and not Chinas, wont make a difference; it will cost jobs; and carbon storage by agriculture and forestry shouldnt be excluded. Others, including competent, and well-meaning scientists, have exposed global warming as the sort of mumbo-jumbo fakery which would almost put a witch-doctor to shame.

However, what none of these groups will say, is that those who created and now champion the global warming fraud, did, and do so, in order to commit genocide.

When inmates at the German chemical giant I.G. Farbens Auschwitz concentration camp were provided barely 800 calories of food per day, it killed them as surely as the gas chambers and firing squads.

The world condemned it as genocide.

By the same measure, environmental policies that suppress energy consumption, and deny populations the normal economic development to generate sufficient sources of energy, are equally genocide. Take Africa, for instance. Ninety per cent of people in sub-Saharan Africa lack electricity, running water, proper sanitation and decent housing, and therefore die, in the millions, from malaria, malnutrition, TB, HIV/AIDS, and intestinal diseases. Not satisfied with those death rates, the British are ramming through their policy of carbon reduction in countries across the continent, typified by the recent decree by the Environment Minister of Chad. He banned the manufacture, importation, and use of charcoal— the sole source of fuel for 99 per cent of the Chad population— declaring, With climate change every citizen must protect his environment.

His sudden decree unleashed chaos and rioting in the country, which the government forcibly suppressed. The British imperialists led by Prince Philip openly intend to impose African-style conditions upon most of the rest of the world. ... Continued Page 2. 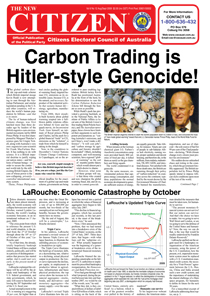