The renowned physical economist and economic forecaster bluntly assessed President Obamas mental weakness for handling the economic crisis, and declared that only the emergence of a new leadership from among the lower 80 per cent income bracket of the population— and not the ruling political elite—will stop a chain reaction economic breakdown crisis from plunging humanity into a new Dark Age.

LaRouche emphasised the physical nature of the current economic crisis: Since the announcement I delivered in an international webcast on July 25, 2007, he said, ...we have been, not in a recession, not in a mere depression, but in a general global breakdown crisis of the economy of the entire planet... which will probably result in ... a reduction of the population of the planet from 6.5- 6.7 billion people today, to less than 2 billion, in a short period of time.

The physical economic breakdown crisis is manifested in the greatest contraction in world trade and global shipping (currently) since the Great Depression, the collapse of Asias production giants China, Japan, Thailand et al., and the deindustrialisation and infrastructural decay of formerly great, industrial western economies like Australia and the United States.

However, instead of addressing the physical economic breakdown, Obamas administration is embracing the monetarist ideas of the self-admitted fascist John Maynard Keynes to rescue Wall Street and the City of London, by reinflating the financial system.

The brainchild of City of London flunky, Assistant U.S. Treasury Secretary Larry Summers, the PPPIP will fork over public money to bankrupt speculative hedge funds, so they can buy up toxic assets held by the major banks. Purchasing these bank assets (at wildly inflated prices) will ostensibly solve the credit crunch. The PPPIP echoes the Macquarie Bank-pioneered PPPs in Australia, such as their Sydney tollroad network, in which the public is looted by private entities, in public-private partnership.

At the London G-20 conference a week or so later, after being feted by the Queen and Prince Philip, and lauded by a gushing British press, Obama gave his tacit endorsement to the monetarist fantasies of British Prime Minister Gordon Brown, and Kevin Rudd, to empower the International Monetary Fund to issue a de facto world currency in the form of Special Drawing Rights (SDRs), which would be outside the control of any sovereign national government.

Choosing his words carefully, LaRouche said, We have to understand the Presidents limitations: that he seems very bright, he seems very capable, but a lot of matters which he deals with, he hasnt got a clue of what hes talking about.

He charged that the President is in the grip of a Satanic cabal of economic advisers, led by Larry Summers and Office of Management and Budget (OMB) head Peter Orszag, as featured in the April 13 edition of TIME magazine, and who advocate the evil, mass-manipulation techniques of behavioural economics. (See box p.3)

The control by this crowd over the Presidents mind must be severed, LaRouche insisted, urging Obama to order them: Git! While you can still do it!

He reiterated his call for a new Pecora Commission to clean out Wall Street, and break its corrupt hold on government economic policy, which Larry Summers personifies, and for the immediate implementation of his Homeowners and Bank Protection Act 2007, to put the whole financial system through bankruptcy reorganisation.

Of most significance to people the world over, LaRouche forecast the emergence of a new leadership from among the lower 80 per cent, as a consequence of the failure of the upper ranks of the official political class to implement key measures like LaRouches HBPA (and the Citizens Electoral Councils HBPB—see article p.4), which would have averted the crisis:

There is a mood building among the ratio of the population which is in the lower 70 to 80 per cent of family-income brackets, who are honest citizens and have a native intelligence, so that, in the proper process, the natural quality of leadership from within the population, will rise ... to a quality of leadership on the national level. (See pp. 2-3 for the webcast transcript: Seven delusions about the economy.) 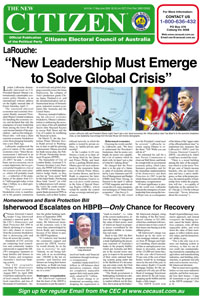