A Report to the Citizens of Australia

Australia is being hit by the global tsunami of a planet-wide economic disintegration. Over the last year, superannuation funds have lost over $450 billion, and the stock market has plunged over 50% from its peak. World-wide shipping and freight has seized up, as has the credit it requires. More than $20 billion, largely in retirees capital, has been frozen by investment funds. Job losses are mounting in all sectors of the economy, most worryingly in the mining and auto industries. The very human cost of this crisis can now be seen on the faces of the 100,000 families, dealing with the collapse of the two largest child-care centres in Australia, ABC Learning and CFK child-care.

This is no mere global financial crisis, as many of our deluded leaders assume it to be.

As Lyndon LaRouche elaborated in his Nov 18 webcast, There is no possible rescue of this system, as such; that is, the present, international monetary system cannot be rescued. If you try to rescue it, you will lose the planet. You have to choose: Replace the system, or get a new planet. Those are your choices.

To deal with the crisis, we must now adopt LaRouches three-part solution: 1) His Homeowners and Bank Protection Bill must be passed immediately, for a moratorium on all home foreclosures and to put the banking system under bankruptcy reorganisation, to keep banks doors open for essential community functions, 2) A two-tier credit system must be established to provide federal credit at 1-2% for productive enterprises and infrastructure, while letting rates float upwards for other, nonessential purposes, 3) The U.S. must take the lead to organise a Four Power alliance of itself, Russia, China and India, to inaugurate a new world monetary system, a New Bretton Woods, to replace the present, disintegrating British imperial globalist system, and then move into long-term treaty arrangements to develop large, capital-intensive types of basic economic infrastructure, such as power systems, high-speed rail, and water projects.

For the last year, the CEC has put the Homeowners and Bank Protection Bill (See New Citizen Vol 6 No 7 April/May 2008), front and centre, before every leader in the country, at the Federal, State and Local government levels. With the HBPB, we must put Australias $13.8 trillions-in-derivativesridden banks into bankruptcy reorganisation, and freeze all mortgage foreclosures.

We must save our banking system at all costs. It is intolerable that individual bank exposure to the worldwide disintegration is unknown and deliberately hidden from public scrutiny by a myriad of accounting techniques, Special Purpose Vehicles, and other magic tricks.

Whilst we reorganise the banking system, we must protect families. The family or household unit represents directly, the potential to develop the future prosperity of our country. Shatter the family unit through homelessness and stress, and you will unleash unimaginable social chaos. Fujitsu Consulting and JP Morgan reported in October, that mortgage-stressed households had increased to one million, and severely mortgage-stressed to 367,000. They attributed the rise to loss of employment and work hours, and projected that a rise in official unemployment to five per cent would translate into 1.4 million mortgagestressed households. On Nov 19, the U.S. Federal Deposit Insurance Corp. (FDIC) forecast that 10 per cent of all U.S. mortgages, or some five million homeowners in that country, will be foreclosed upon and repossessed during 2009-10!

To deal with the domestic banking and home-foreclosures crisis, all Australian leaders need to wake up to reality and follow the lead of Italian Senator Oskar Peterini and others (see Page 3), and introduce legislation within all Australian Parliaments, calling for LaRouches proposal for a New Bretton Woods system: a new credit system, supported with fixed exchange rates, tariff protection and large scale infrastructure development.

By September-October of this year, as wave upon wave of major-company bankruptcies shocked the world, the call for a New Bretton Woods, launched by LaRouche over a decade ago, was suddenly heard everywhere. But, when British PM Gordon Brown proclaims his commitment to a New Bretton Woods monetary reform, hand in hand with a nasty corporativist scheme for governments to fund the reeling private investment banks—watch out! LaRouche rightly emphasises that the absolute requirement is for the original conception which U.S. President Franklin Roosevelt brought to the Bretton Woods conference in 1944: for a decolonialised post-war world, in which the great powers would guarantee the availability of credit for all nations to develop economically. The Keynesian monetary techniques which the world got by with after Roosevelts death cannot be the content of a New Bretton Woods today, and the post-1971 looting régime which Brown would defend is even less suitable. There are more promising impulses from President Nicholas Sarkozy of France and from Italy (see Page 3), the incoming chair of the European Union, whose Economics Minister Giulio Tremonti has engaged in a dialogue with LaRouche on the potential New Bretton Woods agenda, over several years.

Since 1998, the CEC has championed the adoption of LaRouches New Bretton Woods, a call that was wholeheartedly and publicly endorsed by two of the true stalwarts of old Labor, Clyde Cameron and Jim Cairns. From much earlier, 1994, the CEC has had legislation to establish a Commonwealth National Credit Bank (CNCB), a national bank designed, under the control of elected representatives, to regulate the private banking system and issue credit for our nations economic development. Featured in our book, What Australia Must Do to Survive the Depression (see Page 2), first published in 2001, the CNCB is modelled on the best aspects of the original Commonwealth Bank established by King OMalley in 1911. This bank will issue the necessary credit to build the large infrastructure projects, like high-speed rail, water projects and nuclear power plants, vital to grow our economy. The CEC has proposed 17 great national water projects, and nuclear power and transportation projects, elaborated in our February 2002 New Citizen special report, The Infrastructure Road to Recovery.

None of this will be possible, without a decisive break from the globalist policies of Hawke/ Keating and Howard/Costello, which stripped Australia of many key manufacturing and agricultural industries, and took us back to the British East India Companys original, colonial intention for Australia as a source of raw materials. Unless Kevin Rudd breaks from that revived British imperial idea, and turns the nation to a renewed commitment to the Common Good, he should be dumped, and replaced by a leader who will.

Australia has an opportunity: far from irrelevant on the international stage, by virtue of our size, we are a leading nation in the Commonwealth of countries, the biggest political bloc in the world, comprised of nations who share a history as British colonial possessions. Now is the time for Australia to lead a stampede of nations out of the clutches of British imperial free trade, to genuine national sovereignty and economic development. In the Pacific during WWII, our Aussie diggers were legendary in the fight against the Japanese. We just need a show of the same kind of guts displayed back then, from our leaders today. 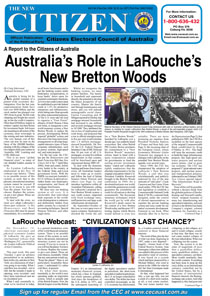